Who can be an “eye doctor”? There is a long history of shifting and blurring boundaries between eye care provided by ophthalmologists (who hold an MD degree) and eye care provided by optometrists (with an OD degree). A parallel, sometimes contentious, pattern of overlap has existed for many years between medical doctors (MDs) in general and doctors of osteopathy (DOs).

In the US, regulation of what each type of doctor can do is up to the individual states. In particular, the extent to which optometrists can offer medical services such as prescriptions is different from one state to the next. MDs and DOs, however, now have the same rights to practice medicine in all states, and have essentially the same educational and licensing requirements. As a result, DOs have gradually expanded their practices into areas once limited to MDs, including ophthalmology.

The result is that some ophthalmology services are provided by all three types. The overlaps stand out when you examine the Medicare data about doctors who provide services classified as “ophthalmology”. This data can be obtained from the CMS (Centers for Medicare and Medicaid Services, www.cms.gov).

We recently did an analysis of the counts of doctors who are MDs, ODs, and DOs providing services classified as “ophthalmology” by Medicare, and we found some interesting trends. 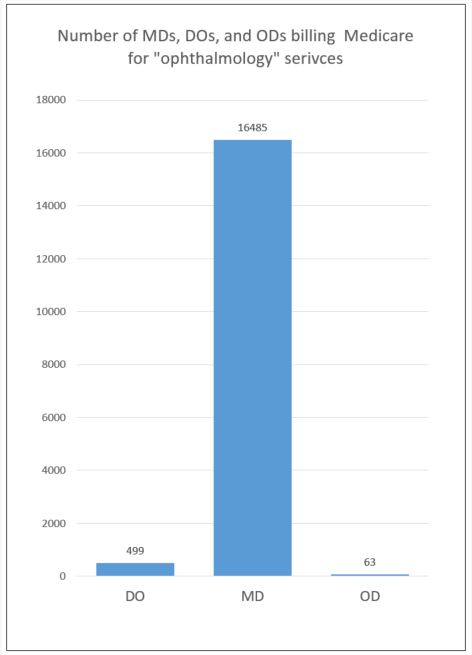 Who else provided ophthalmological services? Based on the credentials listed in the data, we were able to identify 63 ODs, 499 DOs, and 289 “others” (providers with other degrees or with the “Credentials” field left blank).

DOs: a small but rapidly-growing group. We were particularly intrigued by the DO data. There were 499 DOs, which is less than 3% of the total. It is not surprising to find DOs in the data, but we were surprised by the rate of DO growth. Although there were only 499 DOs in the 2014 Medicare data for ophthalmology, their numbers are growing relatively rapidly. In the corresponding 2012 Medicare data (the earliest available), there were 469 DOs. That means the DO count is growing at over 3% per year. MD growth in the same data was barely over half a percent. Perhaps this reflects the relatively rapid growth of osteopathic colleges, compared with traditional medical schools. 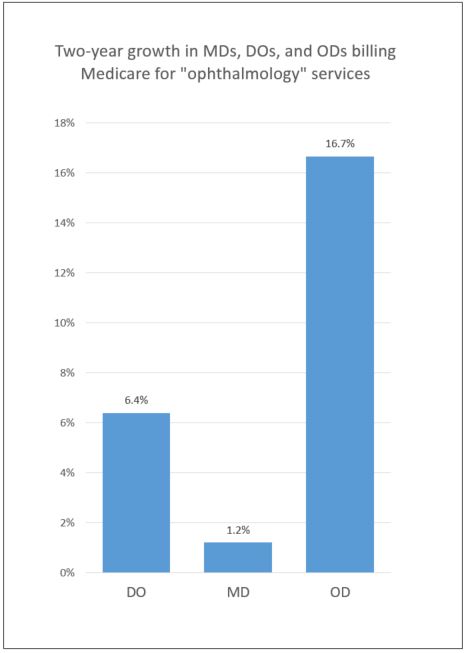 ODs: also a growing factor in ophthalmology. The growth in the number of ODs billing Medicare for “ophthalmic” services is growing even faster than the number of DOs doing so, but the numbers are very small. In 2012, there were just 54 ODs doing this; in 2014, there were 63. That’s a growth rate of over 16%–but the numbers involved are so small as to be almost negligible (about a 1/3 of 1% of the doctors involved). Still, it’s a trend to keep an eye on.

What this Medicare data reflects is a long-term trend in vision care: services that were traditionally offered only by MDs are now increasingly available from other practitioners.